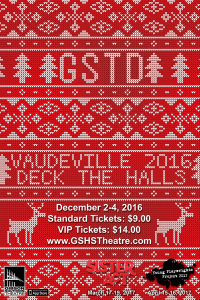 Gibson Southern Theatre opens their forty-third theatre season with Vaudeville 2016: Deck the Halls.  Vaudeville is a community favorite production and the single largest event at Gibson Southern High School with 195 students involved this year.  Vaudeville 2016: Deck the Halls centers around the Greene family as they prepare for their last holiday season in the family home they have known for the last thirty years.  The production runs December 2-4, 2016 and is directed by Adam Bledsoe with assistance from Lisa O’Neal and Lyndsi Gruszewski.

With Mr. and Mrs. Greene’s children raised and moved out of their family home, they decide it is time to downsize.  Their boys, daughter-in-law, and new grand baby are visiting for the holidays, and they often find themselves discussing all of the memories from the last thirty years in their home.  While decorating the house for the holidays, they are visited by carolers, tell stories of their family trip to NYC, and learn how Mr. and Mrs. Greene fell in love.  Only then do they realize that “home” is more than the house in which they live.

Vaudeville 2016: Deck the Halls features performances by the Gibson Southern Drama classes, Choir Department, Competitive Cheerleaders, and the all-girl NoFellaAcapella.  As is tradition, Vaudeville includes something for everyone — from musical numbers to hilarious skits.  Many talented singers, dancers, and actors come together for an amazing night of performances that are sure to usher in the holiday season in a way you won’t forget!

Vaudeville 2016: Deck the Halls is presented in the Gibson Southern Theatre Auditorium and runs December 2-3, 2016 at 7:00PM and December 3-4, 2016 at 2:00PM. Standard tickets are available for $9.00; VIP tickets, located in a priority seating area and including access to the VIP Room with refreshments during intermission, can be purchased for $14.00 each.  Tickets can be purchased online by visiting www.GSHSTheatre.com.  Tickets are also available for purchase at the Box Office, beginning forty-five minutes prior to the show, for an additional $1.00 per ticket.