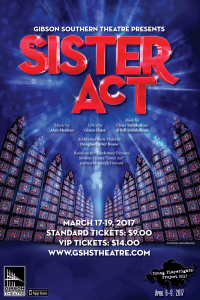 Gibson Southern Theatre continues their forty-third season with the multiple Tony Award nominated musical Sister Act. Written by Cheri and Bill Steinkellner; with music by Alan Menken, lyrics by Glenn Slater, and additional book material by Douglas Carter Beane. Sister Act debuted on Broadway and is based on one of the most financially successful comedies of the early 1990s by the same title. The production runs March 17-19, 2017 under the direction of Adam Bledsoe with assistance from Kathy Parks, Lisa O’Neal, Rob Hutchinson, Aubree Armstrong, and Lyndsi Gruszewski. Senior Emily Scott and Junior Kyra Smith serve as the dance captains.

Set in 1978 Philadelphia, Sister Act begins with Deloris Van Cartier’s dream of being a recording artist with the help of her gangster boyfriend Curtis.  After deciding she can make her dream come true without the help of Curtis, she witnesses him and his thugs commit a crime.  Fearful for her life and with the help of Edide of the Philadelphia Police Department, Deloris agrees to take refuge hiding in the one place that Curtis won’t think to look — the Queen of Angels Cathedral in South Philadelphia.

With news spreading fast of the newly popular choir at Queen of Angels Cathedral, Mother Superior is torn between the newfound popularity of the church’s weekly service and her feelings that life at the convent should return to how it was before Deloris came.  Eddie assumes protective responsibility of Deloris when Curtis and his thugs are hot on her trail.

Sister Act is presented in the Gibson Southern Auditorium and runs March 17-18, 2017 at 7:00PM and March 18-19 at 2:00PM. As a warning, gunfire and strobe lights will be used in this production. Standard tickets are available for $9.00; VIP tickets, located in a priority seating area and including access to the VIP Room with refreshments during intermission, can be purchased for $14.00 each.  Tickets can be purchased online by visiting www.GSHSTheatre.com.  Tickets are also available for purchase at the Box Office, beginning forty-five minutes prior to each performance for an additional $1.00 per ticket.