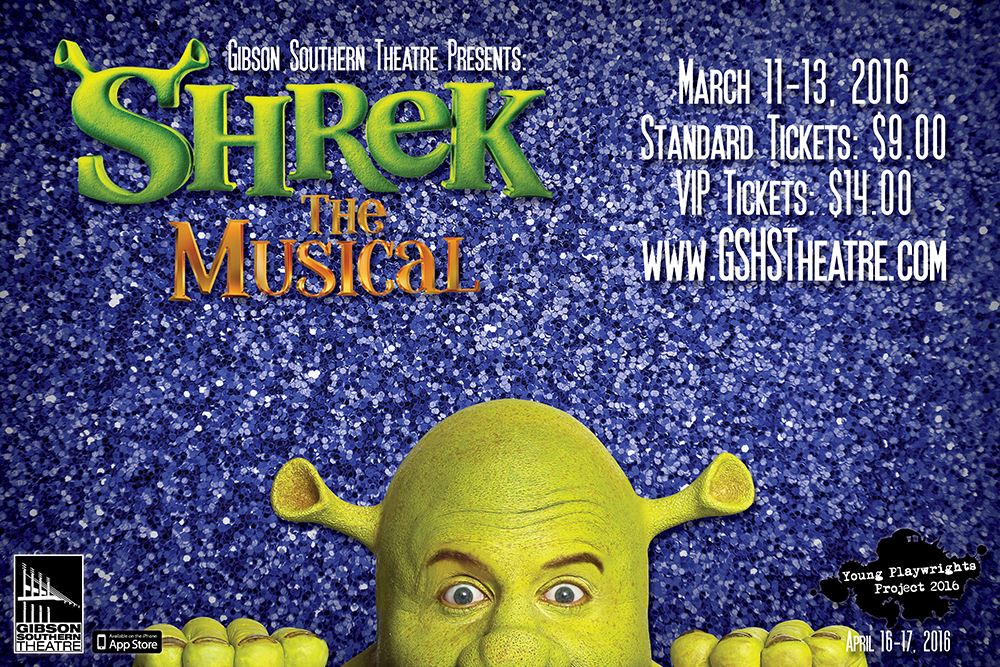 Gibson Southern Theatre continues their forty-second season with Shrek The Musical. Shrek the Musical includes new and old fairy tale creatures that have been loved throughout time. The production runs March 11-13, 2016; it is directed by Adam Bledsoe with assistance from Kathy Parks, Rob Hutchinson, and Lyndsi Gruszewski. Seniors Olivia Mayer, Callie Rendle, and Cameron Haley serve as the dance captains.

Set in a mythical “once upon a time” sort of land, Shrek the Musical is the story of a hulking green ogre who, after being mocked and feared his entire life by anything that crosses his path, retreats to an ugly green swamp to exist in happy isolation. Suddenly, a gang of homeless fairy tale characters, including Pinocchio, the Three Little Pigs, the Fairy Godmother, and the whole crew, raid his sanctuary, saying they’ve been evicted by the vertically challenged Lord Farquaad. It is now up to Shrek to get these fairy tale creatures out and get his swamp back. With the help of a talking donkey and an unexpected friendship with a princess, Shrek takes on the entire land by bringing ugly back.

Shrek the Musical is presented in the Gibson Southern Auditorium and runs March 11-12, 2016 at 7:00PM and March 12-13 at 2:00PM. Standard tickets are available for $9.00; VIP tickets, located in a priority seating area and including access to the VIP Room with refreshments during intermission, can be purchased for $14.00 each.  Tickets can be purchased online by visiting www.gshstheatre.com.  Tickets are also available for purchase at the Box Office, beginning forty-five minutes prior to the show, for an additional $1.00 per ticket.