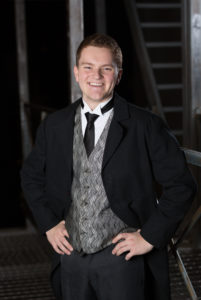 What is your name? Logan Clark

What is your cast role or crew position in Disney’s NEWSIES? Mayor of New York City

What is your favorite Disney’s NEWSIES quote, song or scene — and why? “It’s a compromise we ALL can live with” – Jack Kelly

How many Gibson Southern Theatre productions (including Disney’s NEWSIES) have you been a part of while in high school? 10

What is your favorite role, act, or show that you have been a part of in high school? Sister Act was MY JAM, it was such an amazing time that I’ll cherish forever.

Do you have a favorite story from your time spent in theatre? Hannah Rodgers “MY PANTS ARE HALFWAY DOWN MY BUTT” is my absolute favorite but probably not appropriate so you can “All of the funny quirks of Rob Hutchinson that never fail to crack me up”

What are your plans after high school? Attend IUPUI to study Business and Marketing

What words of advice do you have for those thinking about joining Gibson Southern Theatre? Find someone involved, ask them about how shows work and what is expected, and join in, you won’t regret it!

Do you have anything else to add? Theatre has been the place that has brought me so much happiness, I met lifelong friend that I never would have known, I have been able to apply my talent and skill in various applications, and it truly has been the time of my life. GSTD holds a high rank in my book of life.