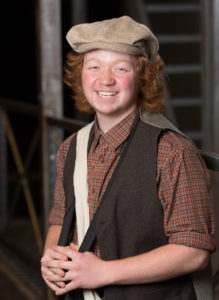 What is your name? Dylan Coston

What is your cast role or crew position in Disney’s NEWSIES? Finch, (Newsie Kid)

What is your favorite Disney’s NEWSIES quote, song or scene — and why? Favorite song is “Brooklyn’s Here” because it shows that all newsies are coming together and striking. As well as the harmonies in the song are gorgeous.

How many Gibson Southern Theatre productions (including Disney’s NEWSIES) have you been a part of while in high school? 6

What is your favorite role, act, or show that you have been a part of in high school? Guys Being Dudes and Lord Pinkleton

Do you have a favorite story from your time spent in theatre? Lane Kell had to miss a show to wrestle for a varsity spot and I learned and played his two songs on stage on guitar sophomore year!

What are your plans after high school? Major in Music at Vincennes while working construction.

What words of advice do you have for those thinking about joining Gibson Southern Theatre? DO IT! It is the best feeling you will have in highschool when you have so many people around you supporting you as your second family!

Do you have anything else to add? This program has taught me so many lessons over the past years and I will love, cherish, and miss this department the most when graduation arrives!