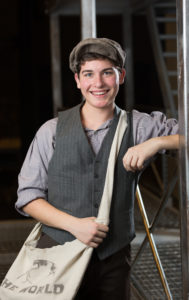 What is your name? Daniel Knapp

What is your cast role or crew position in Disney’s NEWSIES? Elmer

What is your favorite Disney’s NEWSIES quote, song or scene — and why? My favorite scene is Act 1 Scene 5. This is the scene where Jack and the newsies first realize that Pulitzer raised the price of papes and they are outraged. The song “The World Will Know” and the choreography are backed by so much meaning and emotion that it makes it one of the most powerful scenes in the production. It is a ton of fun to perform.

How many Gibson Southern Theatre productions (including Disney’s NEWSIES) have you been a part of while in high school? NEWSIES is my first production.

What is your favorite role, act, or show that you have been a part of in high school? NEWSIES

Do you have a favorite story from your time spent in theatre? Although it’s not the most positive of stories, one of the most memorable things from my time is theatre is when Christian Eichmiller slid under Devon Bullock’s legs and got a huge splinter in his finger from it. I started calling him Splintie after that.

What are your plans after high school? I plan on attending USI.