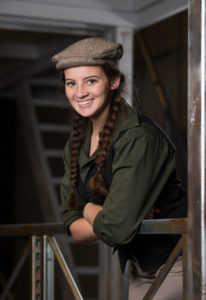 What is your name? Bobbie Jo Allen

What is your cast role or crew position in Disney’s NEWSIES? I am a dancer

What is your favorite Disney’s NEWSIES quote, song or scene — and why? My favorite scene is Seize the day. It just shows that you can do anything when you put your mind to it.

How many Gibson Southern Theatre productions (including Disney’s NEWSIES) have you been a part of while in high school? This will be my ninth GSTD productions.

What is your favorite role, act, or show that you have been a part of in high school? My favorite role was being Sally the clown in Vaudeville 2018, the kids faces were priceless.

Do you have a favorite story from your time spent in theatre? There was one time during a show that my costume got locked into the costume room, and Bledsoe was not on headset so I had to run around into the house during the show and find him for my costume.

What are your plans after high school? I plan on attending Oakland City University and studying Elementary Education.

What words of advice do you have for those thinking about joining Gibson Southern Theatre? My word of advice is to get involved. The support this family brings you is something you will not receive anywhere else, no matter how many productions you are in, there will never be enough.