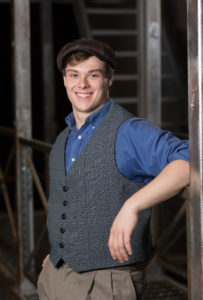 What is your name? Ashby Henning

What is your cast role or crew position in Disney’s NEWSIES? Jack Kelly

What is your favorite Disney’s NEWSIES quote, song or scene — and why? “The World Will Know” and the entire scene is my favorite. It is so energetic and it showcases the brotherhood and determination of the Newsies, as well as an eruption of defiance! STRIIIIKE!!!

How many Gibson Southern Theatre productions (including Disney’s NEWSIES) have you been a part of while in high school? Three: Cinderella, Vaudeville 2018 and Newsies

What is your favorite role, act, or show that you have been a part of in high school? Jack Kelly because he is such an interesting and complex character. He has so much emotion, and is admirable and relatable on so many levels. He’s Just Jack!

Do you have a favorite story from your time spent in theatre? This is like if you were little and you went to the biggest candy store on the planet, and mom said to pick just one. Memories are made every single day! There is no way to pick just one.

What are your plans after high school? To attend either Ball State University or Wabash College to pursue a degree in biology (Pre-Chiropractic)

What words of advice do you have for those thinking about joining Gibson Southern Theatre? Don’t think about it… DO IT! Everybody who hasn’t done theatre before is nervous about auditioning, and I was too. But once I took the step, I was hooked for good, and you will be too. “There’s no escaping us, pal… We’re inevitable.” -Davy

Do you have anything else to add? If I have taken one thing away from GSTD, it is to NEVER doubt yourself. We all have abilities and talents that we don’t know about. Gibson Southern Theatre will bring those out!