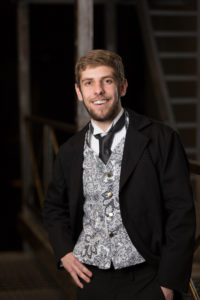 What is your name? Andrew Smith

What is your cast role or crew position in Disney’s NEWSIES? I have the role of Joseph Pulitzer.

What is your favorite Disney’s NEWSIES quote, song or scene — and why? My favorite scene is in Act II when Jack Kelly and Pulitzer come to a compromise. Although my role is the bad guy, I love to see the good guys win. The “spit-shake” between Jack and Pulitzer at the end always makes me want to laugh on stage.

How many Gibson Southern Theatre productions (including Disney’s NEWSIES) have you been a part of while in high school? This is my 4th production, Vaudeville 2017, Cinderella, Vaudeville 2018, and Newsies.

What is your favorite role, act, or show that you have been a part of in high school? Either my role as Pulitzer or playing with the group Guys Being Dudes in Vaudeville. Both have given me a chance to step out of my comfort zone, and I have loved both.

Do you have a favorite story from your time spent in theatre? My favorite story to tell is definitely Guys Being Dudes’ rehearsal with Dr. Humbaugh during show week this past Vaudeville. I had just ran out of basketball practice and gotten mic’d up when Dr. Humbaugh jokingly asked Caleb Sellers and me if she could come on stage with us. Of course, we convinced her to do it. The rest of the cast went crazy when they saw her on stage with us. That was definitely one of the most fun moments of my time in theatre.

What are your plans after high school? I will be attending Indiana University to double major in math and economics.

What words of advice do you have for those thinking about joining Gibson Southern Theatre? Don’t wait!!! I didn’t join theatre until my junior year, and it is my biggest regret in high school. Don’t be afraid to step out of your comfort zone and try something new. I would’ve never guessed I would have a solo in a musical when I was younger, but here I am. My best advice is to not wait.