GSTD Live! serves as the theme for this year’s production. The audience will be transported to New York City to witness a night of entertainment which looks very similar to the legendary Saturday Night Live. Over 180 students will make up the cast and crew for the single, biggest event at GSHS. All of the singing, acting, and dancing will be sure to leave you tapping your foot, on the edge of your seat, or laughing yourself silly. 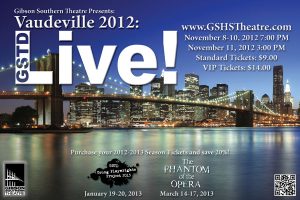 Last school year,the second semester theatre classes were given an amazing challenge. Theatre Director, Matt Hart, proposed a new assignment for the students–to create their own Vaudeville. In the past, Hart had always given his students a topic, phrase, or even just a simple word to build the premise off of. But last school year, he wanted total originality from his students.
This year’s Vaudeville was chosen from the group comprised of;
Sara Kissel
Austin Turner
Danielle Lynn
Mariah Kramer
Christian Rowe

This past summer, Hart posted a picture on his Facebook of the winning Vaudeville idea simply saying, “Congrats to these students!” 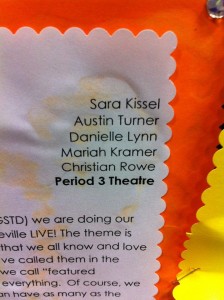 Make sure you get your tickets for this show and the entire season here!