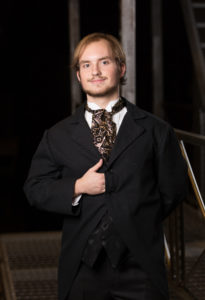 What is your name? Sebastian Knight Venson

What is your cast role or crew position in Disney’s NEWSIES? I play the role of Seitz.

What is your favorite Disney’s NEWSIES quote, song or scene — and why? My favorite song in Newsies is The World Will Know because it sounds very inspiring and it is filled with emotion.

How many Gibson Southern Theatre productions (including Disney’s NEWSIES) have you been a part of while in high school? I have been in Vaudeville 2018: Under the Big Top and Newsies.

What is your favorite role, act, or show that you have been a part of in high school? My Favorite Role is definitely Seitz.

Do you have a favorite story from your time spent in theatre? I have so many great memories that I can’t chose one.

What are your plans after high school? I plan on attending Ball State and Studying Physics

What words of advice do you have for those thinking about joining Gibson Southern Theatre? Do it. It’s scary at first but theatre is like a second family, and you meet so many great people.