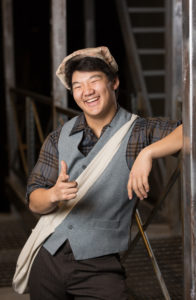 What is your name? Mark Sorg

What is your cast role or crew position in Disney’s NEWSIES? Romeo

What is your favorite Disney’s NEWSIES quote, song or scene — and why? Seize the Day

How many Gibson Southern Theatre productions (including Disney’s NEWSIES) have you been a part of while in high school? 4

What is your favorite role, act, or show that you have been a part of in high school? My Favorite role was playing a cop during my first ever musical, Sister Act.

Do you have a favorite story from your time spent in theatre? This past vaudeville, the cast went to hooters, and devon bullock returned a man’s $20 and got free food because the manager saw his good deed.

What are your plans after high school? I plan on going to USI to study sports medicine.

What words of advice do you have for those thinking about joining Gibson Southern Theatre? JUST DO IT!!! Don’t let what others think prevent you from joining. You won’t regret it.