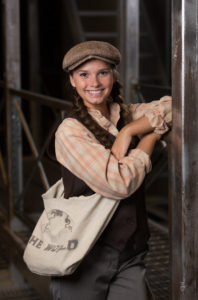 What is your name? Madelyn Rowe

What is your cast role or crew position in Disney’s NEWSIES? Dancer and Bowery Beauty

What is your favorite Disney’s NEWSIES quote, song or scene — and why? My favorite song is Once and For All. I get chills everytime we sing “There change coming once and for all You’re getting too old, too weak to keep holding on”

How many Gibson Southern Theatre productions (including Disney’s NEWSIES) have you been a part of while in high school? 9

What is your favorite role, act, or show that you have been a part of in high school? My favorite role was being a nun in Sister Act.

Do you have a favorite story from your time spent in theatre? During Sister Act, I was in my Michelle costume, jumpsuit, heels, and jewelry. As I was dancing to Fabulous, Baby a ring on my finger shot into the pit. After the show I found it, only partially broken.

What are your plans after high school? I plan to study nursing at USI in hopes to later become an advanced practice nurse.

What words of advice do you have for those thinking about joining Gibson Southern Theatre? Do it. Don’t hesitate because your friends aren’t doing it with you. With GSTD you don’t just gain friendships, you gain a family. You will not regret being a part of such a phenomenal program.