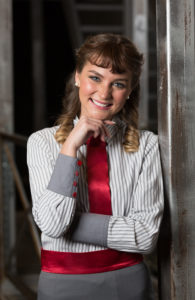 What is your name? Kennedy Obermeier

What is your favorite Disney’s NEWSIES quote, song or scene — and why? My favorite NEWSIES quote is from the song Once and for All. It is sung by the newsies as they express their feelings against the WORLD as they prepare to take the company down. The line is, “They think they’re running this town but this town would shut down without us.” I believe this quote embodies the feelings of their revolution. The newsies come to realize how much power they have and they use all of their angry energy to show Pulitzer who’s REALLY boss.

Do you have a favorite story from your time spent in theatre? My favorite story from theatre comes from my first experience in a Gibson Southern Show. I was a freshman taking first semester theatre arts class with Mr. Hart. Our Vaudeville act was a mashup of many songs from Adams Family. As a freshman, I was trying to get in good with the department, so I took every piece of advice and listened to every piece of direction 110%. When I was to play a ghost in the act, Mr. Hart told us to, “Go to Goodwill and buy a dress that looked old-fashioned. Then paint it white.” Looking back on it, that was the worst advice I had ever been given, but, like I said, I was a rule follower. I went to the Goodwill and bought a dark green dress. I laid it out on my kitchen table and took a paint brush and a tube of white paint and literally painted the dress like a canvas. Obviously, after about 100 layers of paint, the dress was SOLID. It had lost all functionality and could stand on its own. But, Mr. Hart TOLD ME to paint a dress white, so I went with it. Fast forward a few weeks and this is where the best part happened. I made it through dress rehearsal week and press night with no issues (other than the fact I couldn’t lift my arms,) and I was ready to proudly wear my rock-hard ghost dress for opening night. I got it on perfectly fine and did the performance. As I went back to the dressing room (for a quick change) Callen Ambrose couldn’t get my zipper down, which she had never struggled with before. Many people tried to get it down to no avail. I began to cry and was getting claustrophobic from the rock-hard dress on my body and the 20 girls trying to help me get it unzipped. As I stood on a chair, as a freshman, crying, sweating, about to miss my next act, senior Emily Sisk CUT ME OUT of my ghost dress. She literally took a pair of scissors and cut it from the bottom of the skirt all the way up my back so I could be free. For the next three performances, I wore the cut-off dress pulled over my arms like a jacket being worn backwards. I should have just bought a white T-shirt in the first place.

What are your plans after high school? I will be attending Indiana University to study biochemistry pre-med. I have been toying with the idea of a minor in musical theatre.

What words of advice do you have for those thinking about joining Gibson Southern Theatre? It will never let you down. You hear all the time that groups or teams are a “family.” I have never seen a group of people become so close in such as short amount of time as I have during a GSTD show. They will be your biggest fans, your shoulder to cry on, your role-models, and your best friends. On top of the laughs, lessons, and opportunities, Gibson Southern Theatre has given me a place where I feel so welcome and so loved. Oh, and theatre is FUN!

Do you have anything else to add? Shoutout to K.P., Bledsoe, Lisa, and Hutch! I love you all with my whole heart. Thank you for believing in me.