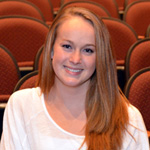 I was lucky enough to get a chance to talk to Dani to ask her about her experiences with Gibson Southern Theatre and Legally Blonde the Musical.

Dani has been involved in Gibson Southern Theatre for eight years now.  She has been a part of 17 shows total, including being a cast member in 5 Vaudeville productions, 2 straight plays, which include the state-winning Between Daylight & Booneville where she played the role of Stacy, 5 musicals including portraying Dorothy in The Wizard of Oz, Anita in West Side Story, and Sharpay in High School Musical 2.  She also brings the title of assistant director  for the past two years of Vaudeville and choreographer for the past three musicals at Gibson Southern along with her.

Dani says, “Legally Blonde has been one of my favorite shows to work on.  It’s such a fun, upbeat, positive musical and I love that it’s all about girl power.  The students in this musical have been great to work with.  They are all hard-working and very talented.  I’ve especially enjoyed working with the “dance group.”  I’m very hard on them and they always rise to the challenges I give them.  These students definitely deserve to be one of the 20 high schools to perform Legally Blonde and I know they will make us all proud!”